A "Who wants to be a millionaire?" style Bar chart 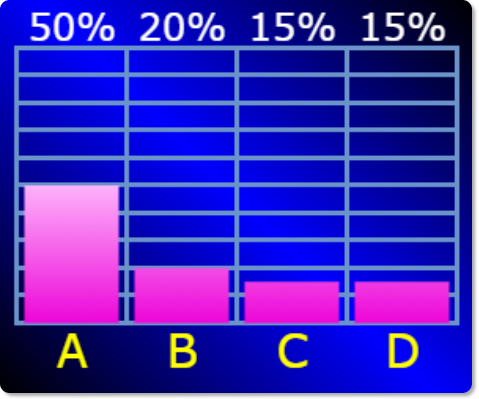 This is an example of a Bar chart that has been customised to have an appearance similar to the "Who wants to be a millionaire?" "Ask the audience" results bar chart. It uses the draw event in conjunction with the API to draw the text above the bars. The background gradient is done with a CSS linear gradient - it's not drawn on the canvas. The background grid is customised in linewidth and colors, the axes are disabled and the text color is customised too.

The CSS gradient that's used in the canvas tag's style attribute is a straightforward linear gradient but achieves a nice effect for the background of the chart. The relevant CSS is this:

It's made up of three parts - an angle for the gradient (which in this case is 45 degrees) and the colors that the gradient uses. There's a whole HOWTO document about CSS gradients here that shows you the various options that are available to you.

There's also an SVG version of this chart in the download archive.