As of March 2012, several new features to the canvas API were announced. These features will make using the canvas tag much easier - particularly reading mouse events, and will also make for more concise code. In turn, this will mean more efficient code, smaller libraries and faster downloads.

Hit regions are possibly the most exciting of all the features. They provide a way for you to define an area of your canvas (and add an id: property to it) and then you can check the event.region property (on the event object provided by the canvas tag event) to see if it matches that id:. No more working out whether the mouse coordinates are within a particular area - which can range from being a chore to being entirely impractical. It will mean that significant amounts of click-detection code could be eliminated from libraries that use canvas and that means faster, smaller downloads and more efficient and readable code. Also, it will mean that click detection becomes much easier for complex shapes. 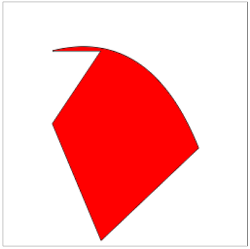 This odd shape would be non-trivial to test for clicks - not impossible - but certainly not straightforward. With hit testing and the new Path object described below, this becomes much easier. Currently, you would have to keep the coordinates to hand and then recreate the path and use isPointinPath. With the new Path objects, you could just keep the object around. With hit regions, you wouldn't have to even do that - just define a hit region for a particular path and it's done for you.

The JavaScript code for this example using the isPointInPath function is this:

You can also associate a cursor type to a hit region meaning that when the mouse is moved into that region the mouse cursor is automatically changed.

The new Path object is really promising. It will bring a slight air of Object Orientation to canvas in that you can draw a path as usual - but unlike at present - you can then save it for later use. So you will be able to test for mouse clicks (with the isPointInPath method) or draw the path again with different colors to add highlighting. Some sample code:

Update January 2013: Dashed lines are now implemented in Google Chrome and there's an article about them here.

Similar to the context.arc method, the context.ellipse method adds an ellipse to the canvas. Indeed if the radiusX and radiusY arguments are equal and the rotation argument is zero then this performs exactly like the arc function.

Text on a path

Previously supported by Firefox only, this allows you to add text to a path and that text will follow the path. This allows for text following a curved line or going around a circle (potentially animated too).

The SVG path syntax is much less verbose. In addition, having paths laid out in a string allows you to easily pass them around. An example is:

Along with the new Path object this allows for easier retention of the shapes you have drawn on the canvas and subsequent testing for click events. In the example the M translates to moveTo and the h is a horizontal line (hence only the X-axis coordinate is given and it's drawn relative to the current position).

When you look at each individual feature listed above then they look good, but when you take them all into account together they are no less than superb. When browsers have support for them they will make working with the canvas tag much easier, mean that you have to write less code and increase the accessibility to users who need it.